Kannan Soundararajan was born and grew up in Madras (now Chennai), India. He was an undergraduate at theUniversity of Michigan, and received his Ph. D. from Princeton University in 1998 under the supervision of Peter Sarnak. After postdoctoral work at Princeton University and the Institute for Advanced Study, Soundararajan was on the faculty of the University of Michigan until 2006, when he moved to his current professorship at Stanford.

Abstract: The gambler’s fallacy is the erroneous belief that if (for example) a coin comes up heads often, then in the next toss it is more likely to be tails. In recent work with Robert Lemke Oliver, we found that funnily the primes exhibit a kind of gambler’s fallacy: for example, consecutive primes do not like to have the same last digit. I’ll show some of the data on this, and explain what we think is going on.

Tuesday, 9/12/17:  "Moments and Distribution of the Riemann Zeta-function and L-functions"
Lecture at 4:10pm in Sinclair Auditorium

Abstract: A function is called multiplicative if f(mn)=f(m)f(n) for all coprime natural numbers m and n. Many important functions in number theory are multiplicative, and the study of general multiplicative functions has been very active in recent years. I will discuss some work in this area, including some of my work with Andrew Granville, and the spectacular progress of Matomaki and Radziwill culminating in Tao's resolution of the Erdos discrepancy problem. 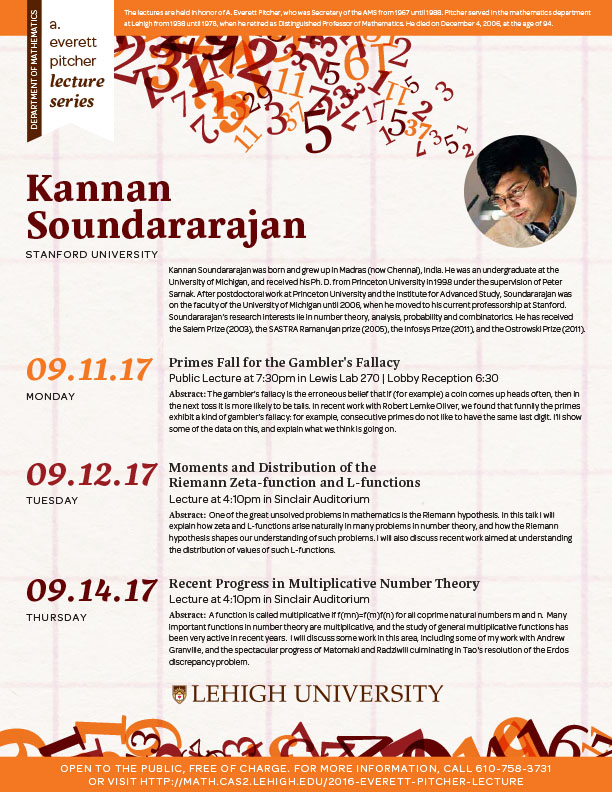