Kinetic theory describes the dynamics of a large number of particles, such as flows of air particles passing an airfoil, or neutrons' collisions in a nuclear reactor. In a statistical fashion, the kinetic description bridges the micro-scale modeling of motion of particles by Newtonian mechanics and the macro-scale modeling by continuum fluid mechanics. Current research by mathematician Lei Wu aims to develop novel mathematical methods to quantitatively characterize these multi-scale models. 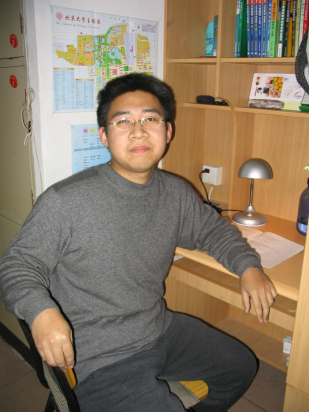 Funded by National Science Foundation, the investigation focuses on the motion of rarefied gas, neutrons, electrons, and ions, in spatially bounded regions under the influence of their surrounding environments. Its applications range from high-tech fields like semi-conductors or nuclear fusion, to daily-life devices like water sprays or fluorescent lamps.

Wu’s project focusses on the hydrodynamic limit of the Boltzmann equation or transport equation, such as how the solution varies asymptotically when a small parameter approaches zero. In mathematics, a domain is any connected open subset of a finite-dimensional vector space. A bounded domain is a domain which is a bounded set, while an exterior or external domain is the interior of the complement of a bounded domain. In these bounded domains, kinetic boundary corrections play a crucial role. Wu envisions a model to justify the validity of the asymptotic calculation in the presence of singular boundary layers. He also hopes to develop general theories of geometric correction in these boundary layers.

Wu’s current venture is an extension of another research effort exploring surfactants (a morpheme for “surface active agents”), chemicals that can change the strength of surface tension when they collect at fluid free interfaces. Variations in the surfactant concentration on the surface also give rise to tangential surface forces called Marangoni forces. The surfactant dynamics are driven by several effects: absorption and desorption from the free surface, fluid transport along the surface and in the bulk, and both bulk and surface diffusion. In manufacturing and industrial applications, surfactants are a fundamental tool for stabilizing bubble formation in processes such as foaming, emulsifying, and coating.

Surfactants are absorbed in the body, and Wu and his colleagues are looking at the interactions at the surface.  At times, water can absorb some of the surfactant but when the density is too high it gives out these surfactants and this interface between them is being explored by Wu.

“The surfactant will affect the surface tension and there is a complicated interaction between all these effects,” says Wu, assistant professor of mathematics. “In mathematics, we call this a stability problem. We have an equilibrium that looks perfect but the actual fluid can hardly stay in that equilibrium. There is always some oscillation, some perturbation, and we want to predict the long-term behavior of this process.”

Ideally, this undulation will decay and return to its equilibrium, but sometimes absorption or desorption increases and Wu is developing a model to show this is not the case. It is an extension of his work in surface waves. Imagine a glass of water. If you shake it, the water moves up and down, and you want to predict the long-term behavior that is very difficult.

“Mathematically, it’s an interesting question,” he says. “It hard to do that. The equation is highly nonlinear. Somehow we don’t have a general method to handle such complex systems. We start with a simple model like this and eventually we show that surface tension and surfactants make the system more stable.”